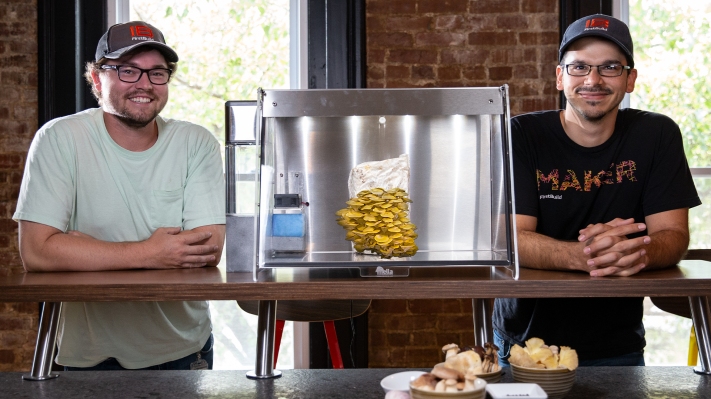 If you are running R&D at a large appliance manufacturer, you have a challenge.

It typically manufactures products in huge quantities at fairly low margins. To recoup development, tooling, and launch marketing costs, you need to create and sell a large number of products. To make sure that’s possible, you’ll probably end up doing a ton of user and market research to make sure you have the highest chance of success with your products.

That makes sense, but the business model itself means it’s hard to do anything really risky, which in turn means the major manufacturers rarely come up with anything really innovative.

If there was an apparatus for mushroom fruiting, would there be many more people growing mushrooms at home on a regular basis? There was only one way to find out: build one and try to sell it.

That’s where FirstBuild comes in. If you’re a small appliance nerd, you may have seen their Opal nugget ice machine, the studio’s first big breakthrough; the fruiting chamber of the Mella fungus; your indoor pizza oven; or the Arden indoor smoker. I spoke with André Zdanow, president of FirstBuild, to find out where these ideas came from and how the studio is working to try to replicate those successes.

“The most famous example is probably the Opal nugget ice machine. At first, it wasn’t really a product at all — it was a technology that was being worked on in the refrigeration division of GE Appliances,” Zdanow said, explaining that it turned out to be a headache. They wanted to put the “ice nugget” in a refrigerator, but couldn’t figure out exactly what the size of the market would be for such a thing. “In reality, it is very complicated to put the technology in a refrigerator. In other words, it was really a great idea that the engineers had been toying with for years, but in the context of the focus and economics of a multi-billion dollar company, it wasn’t something they could focus on.”

In a parallel universe, that technology would never have seen the light of day, but instead the engineers came to FirstBuild and wondered what would happen if they put the technology in a separate appliance, instead of a full-size refrigerator.

“We see a lot of people who go to the store and buy this type of ice. They call it sonic ice or hospital ice. We decided to develop a prototype and see if people want it to be just an ice machine,” Zdanow explained. That was the genesis of the success of the FirstBuild lab. “It started with crude concepts that looked like an ice machine but contained nuggets of ice. From there, it progressed through industrial design and ultimately to a $2.7 million crowdfunding campaign on Kickstarter in 2015.”