Stephen Fry has deleted his Twitter account as the exodus of celebrities from the social network under the ownership of Elon Musk continues.

The actor and presenter posted an image of Scrabble letters spelling “Goodbye” to his 12.5 million followers before leaving the site.

Fry has left Twitter several times. In 2016 he left saying “fun is over” after a backlash over his comments about a costume designer. He said the site had then become a “stalking ground for sanctimonious sanctimonious people”.

On Monday, Whoopi Goldberg left the network, telling viewers of her US TV show The View: “It’s been a little over a week since Elon Musk took over Twitter and this place is a mess. I go out today. . . I’m tired of having certain types of attitudes blocked and now coming back up.” Goldberg cited Musk’s mass removal of Twitter staff, as well as his decision to ban comedian Kathy Griffin. 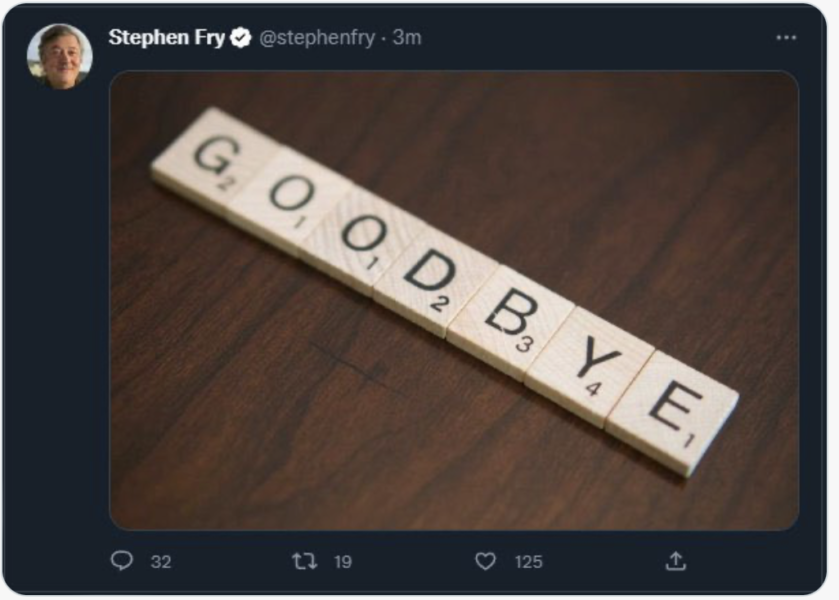 Fry joined Mastodon, an alternative social network, which has seen a surge in users since Musk’s acquisition. In his first message, or “toot” about Mastodon, he said, “I wonder if this service [is] Named for Bertie Wooster’s big confession: ‘As a rule, you see, I don’t get dragged into Family Rows. On the occasions when aunt calls aunt like mastodons bellowing through primeval swamps. . . the clan tends to ignore me.’ A spokesman said: “Stephen Fry thought the time was right to move on.”

Fry and Goldberg join a slew of stars who got rid of their accounts last week. The model Gigi Hadid (ten million followers), the producer Shonda Rhimes (two million) and the singer Sara Bareilles (three million) have left. Musk hasn’t flinched, banning Griffin and another comedian, Sarah Silverman, after they posed as him and protested his plan to charge people $8 a month for a check mark on accounts. He also prompted users to leave and join Mastodon.

His optimism seems to be fueled by the number of Twitter users, which he says is at a record level. He tweeted a graph as evidence of the data, but its origin is unclear.

Musk, 51, is facing a backlash that led him to declare “a massive drop in revenue” after advertisers halted spending due to policy uncertainty and content moderation. With an additional $1.2 billion in interest payments over the next 12 months on the debt used to buy Twitter, the Tesla boss is looking for new sources of revenue and cost cutting.

However, leaks to the Platformer website suggest that the $8 verification could cost the company money. Those who sign up for the program were promised fewer ads, but internal estimates suggest that would mean a $6 monthly drop in US ad revenue per user.