As Elon Musk struggles to get people to give Twitter $8 a month for a blue check, Tumblr had an idea: What if they offered users $8 for not one, but two blue checks?

Yes, you can legitimately buy two blue checks for your Tumblr blog. For the low, low price of $7.99. As Tumblr wrote in an official post: “That’s cheaper than other places, when you consider that you get not one, but TWO checkmarks for your blog.”

If you keep paying Tumblr, you can get even more blue checks. Do you want 10 blue checks? That will be around $40.

The initial launch of Tumblr’s Post+ subscription was a disaster, as users worried how the harsh realities of capitalism would change their fan paradise. But Tumblr users have proven extremely willing to pay money for two things: browsing without ads and posting junk.

According to data from SensorTower, Tumblr’s mobile app has seen roughly $507,000 in consumer spending since April. That was the month that Tumblr announced Blaze, a feature that allows users to promote their own posts. Not coincidentally, Blaze debuted on April 20 with price points ending at $4.20.

On a platform like Facebook, boosted posts are usually for businesses. On Tumblr, Blazed posts are commonly used to make other people witness your cursed content. 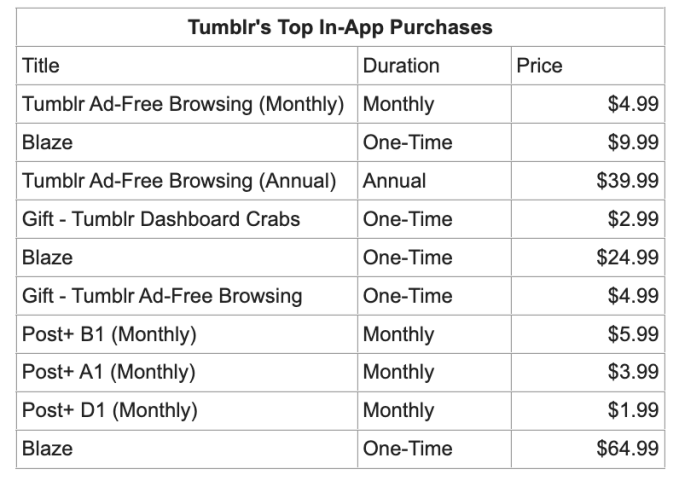 Since Blaze launched, Tumblr’s top five in-app purchases have been ad-free browsing (monthly and yearly), two price points for Blaze, and…crabs. Yes, crabs. In July, Tumblr added a feature that lets you send someone crabs that dance around your board for a day, and now, the crabs have generated more in-app purchases than Post+.

Tumblr’s paid jab on Twitter verification just went live, so we can’t say yet how profitable it will be. But if Tumblr’s history is any indication, this should be a financial success, as Tumblr users seem to want to buy things that are useless.

According to analytics firm Similarweb, Tumblr did not see a significant increase in monthly visits worldwide on mobile and desktop after it launched creator monetization features in summer 2021. However, Tumblr is generating more interest now that we live in a world where Elon Musk owns Twitter. Other alternative social networks have also seen an influx of new users: Mastodon nearly doubled its user base so far this month.

If you’re looking to ditch Twitter when Elon Musk settles in as its new owner, I hate to break it to you: Tumblr may not be your saving grace (unless you’re a former “Superwholock” fan whose new favorite book is “Gideon the Ninth,” in which case, you’re probably still on Tumblr anyway). But to be fair, none of the Twitter alternatives that are floating around, no, not even Mastodon, are likely to become the new Twitter.

Regardless, Tumblr now has something that Twitter doesn’t: two blue check marks.